I’ve just completed reading an article about donkeys in the Wall Street Journal, of all places!  There’s a fellow out in NY, who seems to have caught the donkey bug, but harder than me. He’s got at least ten of them; I have three.

It’s a fun article, the author and the humans on the scene that she talks with all have a sense of humor. For a few of the more technical aspects, it has been well hoofnoted. 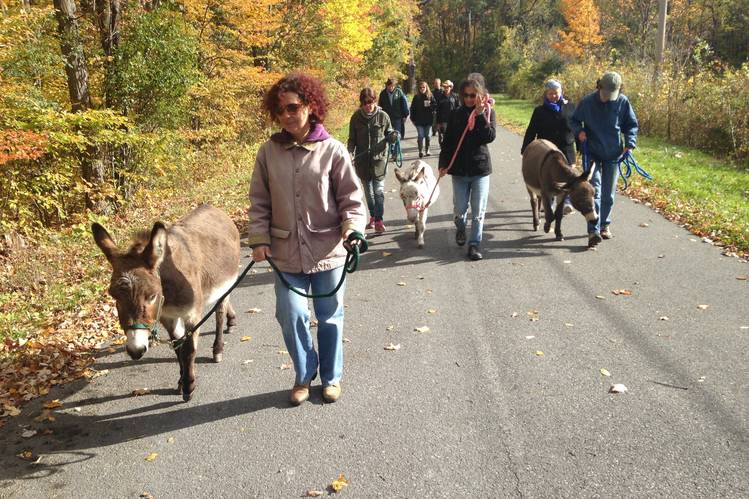 The article is about a retired software engineer, Steve Stiert, who is delivering a layman’s course in donkeys at his ranch: Donkeys 101.

From the WSJ article: “There’s no animal I would rather take to a desert island than a donkey,” Mr. Stiert told his Donkey 101 class on a recent fall afternoon at his 4-acre ranch, which he calls “Donkey Park.” The 57-year-old first became captivated by donkeys after seeing a video of one playing with a dog, and says his passion led him to pursue donkeys as an avocation after retiring from International Business Machines Corp. in 2013.”

I know of a few donkeys, other than my own, living in the Malibu Canyon, but I have not met any of their owners yet. Maybe I’ll start my own Donkey 101 class here!

Mr. Siert is an inspiration. And, judging from the article, has got it together a bit more than I do. Here he’s got all these people snuggled up and walking his animals and the Wall Street Journal writing an article about him. In contrast, look at the video to the left. No paying students, and my donkey has taken me for a ride by getting pinched by a Malibu cop for going out clubbing with out me!

Maybe it’s just the difference between a west coast and an east coast donkey. Should I be teaching my own Donkey 101?

I am going to write the author of this article and Mr. Siert as well to thank them for this. I am also going to tell them about SPANA, the  Society for Protection of Animals Abroad.

Mr. Siert  and I have the good fortune of being able to keep these animals as friends and pets. But, for the greater majority of the world, donkeys are work animals and a vital component of day-to-day life in underdeveloped countries.

SPANA’s  important work is to go into these areas and establish veterinary services and to educate the people who own these animals better procedures for their care and health. 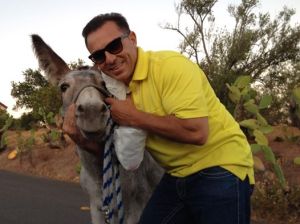